How I Became a Photographer... 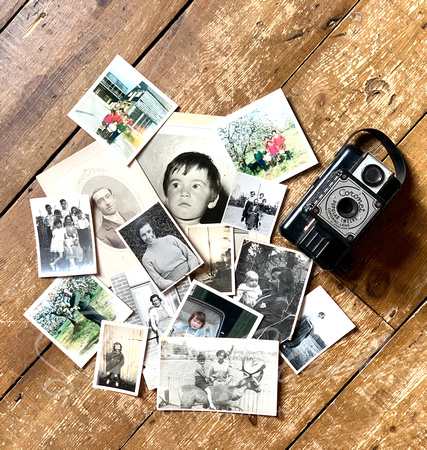 My passion for photography started with my Mum’s old camera and a pile of old family photos.

My Mum’s camera was one of her treasured possessions but, of course, film was very expensive back then so she never took as many photos as she would have liked.  I am the youngest of 5 children so by the time my parents had me I think they had become too busy to take many photos so I only have a handful and there doesn’t seem to be any of me as a tiny baby.

Photographs are so important in connecting us to our past.  They remind us of people, places, feelings and stories.  You can never have enough photos, especially of people.  Each image will show something that’s slightly different.

I started taking photos in my late teens, when I actually had access to a camera.  I wanted to capture everything and I was known as the friend who always had a camera with me.  At that time I never even thought that it could be a career for me.  I didn’t think anybody would be interested in the photos I took or in the reasons I took them.

I was given my first SLR camera for my 30th birthday and it was at this point that I thought perhaps I could do more with my photography.  For a number of reasons, I gave up my job as an Operations Manager for an Investment Data Services company, when I had my second son.  I spent my time being Mum to my two boys and, of course, taking photos.  More and more people asked me to take photos for various events and in 2000 I took the plunge and launched my own photography business.  It was such a scary thing.  I didn’t know whether I was good enough to do it as a job but overriding that I just wanted to show people how important it is to capture a moment in time and have that memory forever.  Of course I have done workshops and courses over the years but I don’t think anybody can teach you how to capture the real nature of somebody in a photo.  We all see things in a different way and I wanted to capture images that would reflect the kind of feelings that I always had when I was looking at the pile of old family photos.

People are my passion.  Every face tells a story…..  I want to capture people as they are.  It’s not just about what a person looks like but it’s about the essence of what makes them who they are.

So that’s how I became a photographer.  Nothing dramatic but just a very personal journey.  I’m so glad that other people can see what I see though, and that they want me to take photos for them.  Photos that become treasured memories.